Alison Kerby owns and operates a guesthouse—which is not to be confused with a bed-and-breakfast, as she emphatically makes clear—in the New Jersey shore town of Harbor Haven. The divorced mother of precocious eleven-year-old daughter Melissa, Alison is known by many in town as “the ghost lady.” That’s because the guesthouse is allegedly haunted—allegedly as far as the townsfolk are concerned, factually so to Alison, Melissa, and Alison’s mother, all of whom can see and communicate with ghosts. The wraiths who inhabit the guesthouse are Paul Harrison, a private detective, and Maxine “Maxie” Malone, an interior designer, both of whom died there. Alison’s late father drops in for periodic visits. 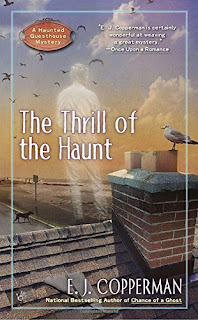 The ghostliness is a boon to Alison’s business since a “haunted” guesthouse is an attraction to vacationers, and Paul and Maxie, though invisible to them, provide daily entertainments at Alison’s behest. Unlike Maxie, who can move about freely, Paul is confined to the guesthouse property. In return for agreeing to help Alison with the twice-daily performances, he who loved investigative work persuaded Alison to get her own license. “(He) needed a partner…who had the advantage of still being able to breathe. He also needed someone who could leave the house and its surrounding property since (he) was unable to do so. And he needed someone who could talk to living people and be heard.” Alison carelessly agreed and earned the license, which “I had never intended to actually…put to use, but Paul had other ideas.”

And so we have an almost-but-not-quite Nero Wolfe/Archie Goodwin partnership, with Maxie functioning as one of the operatives Wolfe occasionally employs when Alison/Archie can’t deal with several issues simultaneously, or when Maxie’s ghostliness makes entering and leaving certain locations safer than it would be for Alison.

The Thrill of the Haunt, the fifth title in the Haunted Guesthouse series but the first one I’ve read, begins when Alison and her friend Jeannie are out and about one day and encounter a local homeless man, Everett Sandheim, who knows who Alison is and who tells her he’s been hearing ghosts he’d like her to expel for him. When, later on, Everett is found murdered—stabbed to death multiple times—in a local service station men’s room that is locked from the inside, murder weapon not present, Alison is hired—read both hired and “dared” by one Kerin Murphy and her local Harbor Haven “posse”—to solve the crime. Alison is also hired by a woman named Helen Boffice to determine whether her husband David is cheating on her—but not so she can divorce him. I won’t spoil things for potential readers by revealing why she wants to know. Suffice it to say this leads to another murder with which Alison, along with Paul and Maxie, must contend.

Alison’s first-person narrative style has the intimacy of a one-to-one conversation with the reader, a style notable for its wryness—as is much of her dialogue with Maxie and others. It makes for a great deal of humor, some of which is likely to have readers chuckling aloud, and for a fast pace. My initial attraction to the novel was the locked-room aspect, but it is definitely not in the John Dickson Carr/Paul Halter/Clayton Rawson league. The comedy, however, redeemed it, and I can see myself reading other titles in this series when I want some light and lighthearted entertainment.

The Thrill of the Haunt is an easy recommendation to fans of humorous cozy mysteries.

Derringer Award-winner Barry Ergang’s work, including his locked-room mystery novelette The Play of Light and Shadow, is available at Amazon and Smashwords, along with other stories and collections.