An Unhappy Anniversary Of Sorts

It was a year ago today that I had to deliver the devastating news that the best hope we had for significantly delay the inevitable---the stem cell transplant--- had failed and the cancer was back with brutal vengeance. Sandi and I were devastated though she took it far better than I did. That has been her way the entire time since she was first diagnosed back on Thanksgiving Day in 2011. 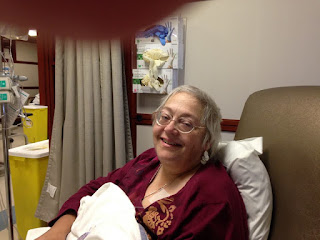 It is probably because of her attitude and a lot of support by folks we most likely will never meet as well as a few folks we have met why she is still here. Sandi has far exceeded what all the doctors and nurses thought was possible when they first diagnosed her as terminal. She has blown them away by still being here a year later. That absolutely was not supposed to happen. Yet.....thankfully...it has.

How much time we have left......I have no idea. I am acutely aware of the sword hanging above.....while also very grateful that we had this. My only real regret in all of this is that I was unable to take the financial pressure of the bills, collection agencies, etc., off of her when she needed the peace the most. In that, I have failed and failed miserably.

You may have shared the financial blows, but you've given her the best gift of all - you. Together you've faced things and because of your support and caring, you probably are one of the main reasons Sandy has survived far beyond the medical know-it-alls predictions. Don't beat yourself up ... it only takes away from the good you share.

I agree with Debra. You've been there for her every step of the way. I'm sure she appreciates that.

Kevin, you and the boys have given Sandi what she needs the most and the love amongst you all will carry you through whatever the future may bring. As so often happens, Sandi's illness is unfair and beyond our understanding but I'm thankful that Sandi has had you to support her along the way and that you've had Sandi longer than you could have expected. Try to not take blame for the financial situation you could not have foreseen nor prevented---take comfort in all you *have* been able to do.