Author Lawrence Block is once again making several books free over the next five days as announced in his newsletter. Each book is free for 24 hours until midnight. His offering today is After the First Death (The Classic Crime Library Book 1). Amazon synopsis: 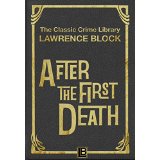 Alex Penn wakes up in a squalid Times Square hotel room. This is what he sees when he finally opens his eyes:

“The floor was a sea of blood. A body floated upon this ocean. A girl—black hair, staring blue eyes, bloodless lips. Naked. Dead. Her throat slashed deeply.

Years before, Alex Penn woke up in similar circumstances, called the police, went to prison. A technicality freed him—and now there’s been another drunken blackout, another dead streetwalker.

But something nags at his memory, and he begins to suspect some other hand wielded the knife. And if he didn’t murder this woman, maybe he didn’t kill the other one, either.

So he runs, adrift in an urban jungle, hoping to steer clear of the police long enough to solve the crime.

AFTER THE FIRST DEATH is sure to appeal to fans of David Goodis and Cornell Woolrich. And, with its gritty New York setting and its undercurrent of alcoholism, it can be considered a precursor to Lawrence Block’s iconic Matthew Scudder series.

THE CLASSIC CRIME LIBRARY brings together Lawrence Block's early crime novels, reformatted and with new uniform cover art. This first volume in the series contains as a bonus the first chapter of DEADLY HONEYMOON.