Monday With Kaye: "So Pretty It Hurts" by Kate White

This week author Kaye George brings us word of the sixth book in the Bailey Weggens Mystery Series titled So Pretty It Hurts published in 2012. If you are like me and want to read in order from the beginning start with the 2002 release If Looks Could Kill.

So Pretty It Hurts by Kate White 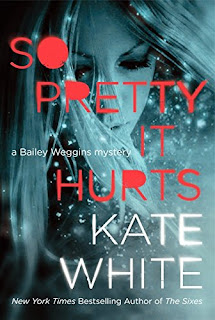 The new book by NYTimes bestselling author Kate White doesn't disappoint. The writing couldn't be better. It sucked in this reviewer from the first page. Bailey Weggins, true-crime reporter living in Greenwich Village snags a choice invitation to a house party with some odd celebrities. Her aptly named beau, Beau, is in Sedona and that's creating some tension between them.

That's nothing compared to the tension among the house party group, which includes supermodel Devon Barr, a rail-thin woman who never eats, and her adoring entourage. All of whom seem to dislike her in different ways and to various degrees. Devon has a big surprise for the guests, but is doesn't turn out well. After her plea to Bailey in the snowy woods outside the house, and after Devon turns up dead, Bailey can't rest until she digs into her death. The music world and the members of the modeling community who are present are all affected by her death, but who is responsible?

This superb mystery gives the reader a glimpse into a glamorous world where most of us will never travel. I felt I was there when I read this book.


Reviewed by Kaye George, Author of Smoke, for Suspense Magazine