Monday With Kaye: "The Body in the Boudoir" by Katherine Hall Page (Reviewed by Kaye George)

In case you wondered, the series began with The Body in the Belfry back in 1990….

The Body in the Boudoir by Katherine Hall Page

Page's latest Faith Fairchild cozy is a departure for her. Most of her other books in the series have been squarely on the murder mystery shelf. In this, the twentieth book, Faith Fairchild, caterer and minister's wife, is in an airplane, flying to Europe to celebrate what I think is their twentieth wedding anniversary with her beloved Tom. She slips into a reverie, recalling her marriage and the events leading up to it, and that is what comprises the story. There's not much mystery. That is, there is no murder until page 120, although another mystery--more of a puzzling event--is brought in around page 104. 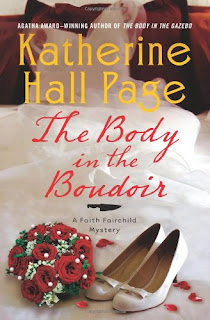 But it's fun seeing the early days of Faith and Tom. Faith's sister, Hope, is in a disastrous relationship which is affecting her business. Faith is rather busy with wedding plans, though, and doesn't pay much attention, so there's a good big of tension there. Faith also employs an emigrant named Francesca who seems to be hiding something from the other employees at Have Faith. One more stressor is Tom's sister, who takes an instant dislike to Faith.

Faith's main conflict is leaving New York and all the dining and shopping opportunities there to move to Alesford in Massachusetts. Like many New Yorkers, she doesn't know that people elsewhere actually dress and eat and have lives, too, but she does find this out and becomes content with her lot.

There are some minor incidents which could or could not be construed as attacks, but no one is alarmed by them, until the body shows up late in the book.

This is a nice trip down memory lane for fans of Faith. Lots of references to clothing designers and food, and yummy recipes in the back.


Reviewed by Kaye George, Author of Choke, for Suspense Magazine

The title and the cover grabbed me, which isn't easy to do.
GREAT review.
Thanks!