Review: A Shot In The Texas Dark: An Al Quinn Novel by Russ Hall 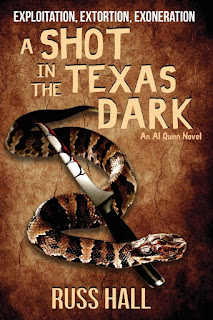 A Shot In The Dark: An Al Quinn Novel is the fourth book in the AL Quinn series. There is also a short story collection, The Hairy Potter And Other Al Quinn Mystery Stories. The novels are books best read in order as situations involving Al and his family and friends evolve over time. These are books where the characters age and change and plot points and other details from earlier books can also come up and are discussed.

Picking up a few months after events in Throw The Texas Dog A Bone, Al Quinn and his girlfriend, Fergie, are on a stakeout. They are watching a certain motel room. Even though the blinds are completely closed they are still able to see the occasional intense flash caused by professional camera work. This is a situation both of them saw over the years before Fergie retired from the City Police and Al retired from the Sheriff’s Department. They know that those flashes of light mean somebody’s daughter, sister, or cousin, is being photographed in great detail in poses that do not require clothes.

The only reason they are there sitting outside the motel room in the Texas night is because of their meeting earlier in the day with the woman known to all as the  “Bone Lady.” When he worked for the Sheriff’s Department, Al always had a good reputation with the folks of the various Native American tribes in the area so the Cheyenne woman had grudgingly asked for his help. She wants her daughter, Gerta, found and does not have any idea where she is or the names of any of her daughter’s friends or acquaintances. All she knows is that she is out making a fool of herself with a white man. 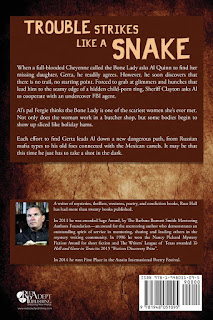 That hunt has led Al and Fergie to a trashy motel where they sit at three in the morning while the bright lights flash behind the blinds.  The fact that Gerta took off with Mom’s car is bad enough. The fact that she is fifteen and possibly being photographed in that motel room is a far worse thing. Al and Fergie are pretty sure Gerta is in that room. Especially since her Mom’s stolen car is parked right outside the room.

Among other things, a nice thing about being retired is not as hemmed in by the rules and legal necessities. They could call the law enforcement folks they know and have worked with in the past, but they also know that the case at this point is pretty weak. Or, they could just interrupt the deal themselves before whatever is going on gets any worse, and if they are wrong any charges against them would be relatively minor. Their decision to put a stop to what is happening in that room leads them into a series of dangerous encounters with a hidden child pornography ring, the Russians, Mexican drug cartels, and more in a case that moves in and around the Texas Hill Country.

The latest in a very good series that began with To Hell and Gone in Texas is another good one. Relationships inside and outside the family are a key component of this mystery series. So too is a strong appreciation of the people and the Texas countryside in drought, flood, and everything in between. Those details are on top of the complicated mysteries at work in the stories. Author Russ Hall always entertains and certainly does here with A Shot In The Texas Dark: An Al Quinn Novel.

Using funds in my Amazon Associate account, I picked this one up in early May at a far lower pre-publication price.