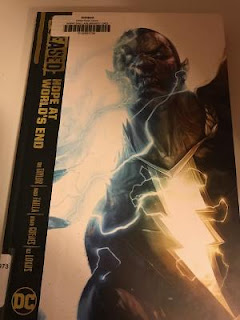 DCeased: Hope At World’s End by Tom Taylor is another tale set in the DCeased Universe. This one is set between the events of DCeased and DCeased:Unkillables. This tale focuses mostly in the time after the destruction of Metropolis and the process of evacuating the survivors to safe locations during the war between the heroes of Earth and the infected. This volume is primarily narrated by Jimmy Olsen with the main antagonist Black Adam and his infected army.

The issues that make up this volume were originally only released in digital or eBook format only and have been collected together in this book to make a print version. Because of the way the material was originally released, the main characters of each issue vary. and include several characters not used in other books of the series. While this read contains 15 issues, each issue consists of fewer pages than print issue reflecting the fact that each issue was originally a digital product. Additionally, because of that, the art varies tremendously between issues as a number of different artists contributed over the digital series. 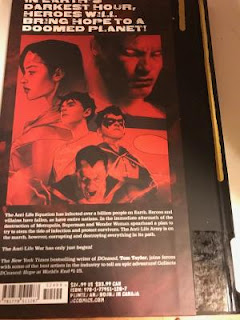 DCeased: Hope At World’s End is largely content that is designed to flesh out the time period between events in DCeased and DCeased: Unkillables. There is some limited character development, some humor, and plenty of action.  The content presented is rather good, but most of it is not very important to the main stories of the other volumes. This volume is primarily for people who love DC Comics and care about what happened to side characters during the war. The main characters play a role in this tale, but most of the focus is on side characters not relevant to the other volumes of the series. If you are very familiar with the series and want more DCeased content, then DCeased: Hope At World’s End is a good read for you. However, new readers should read the previously referenced books, at the minimum, before reading this volume so you have an idea of what is going on in this series.

While DCeased: Hope At World’s End is the weakest read in the overall series, it is still a pretty good read.

My reading copy came from the Dunbar Branch of the Dallas Public Library System.