Based on the dream journals of Kyle J. Knapp, David Cranmer has crafted a book of love dedicated to his nephew with The Lizard’s Ardent Uniform & Other Stories: Veridical Dreams Vol. 1. Using a handful of lines from those journals as inspiration, David sent each one off to a few select writers along with some insight into Kyle. As David Cranmer explains in the very moving introduction, the 23 year old Kyle would have liked these stories as they contain a twist or two. To say these stories have a twist is to put it mildly. 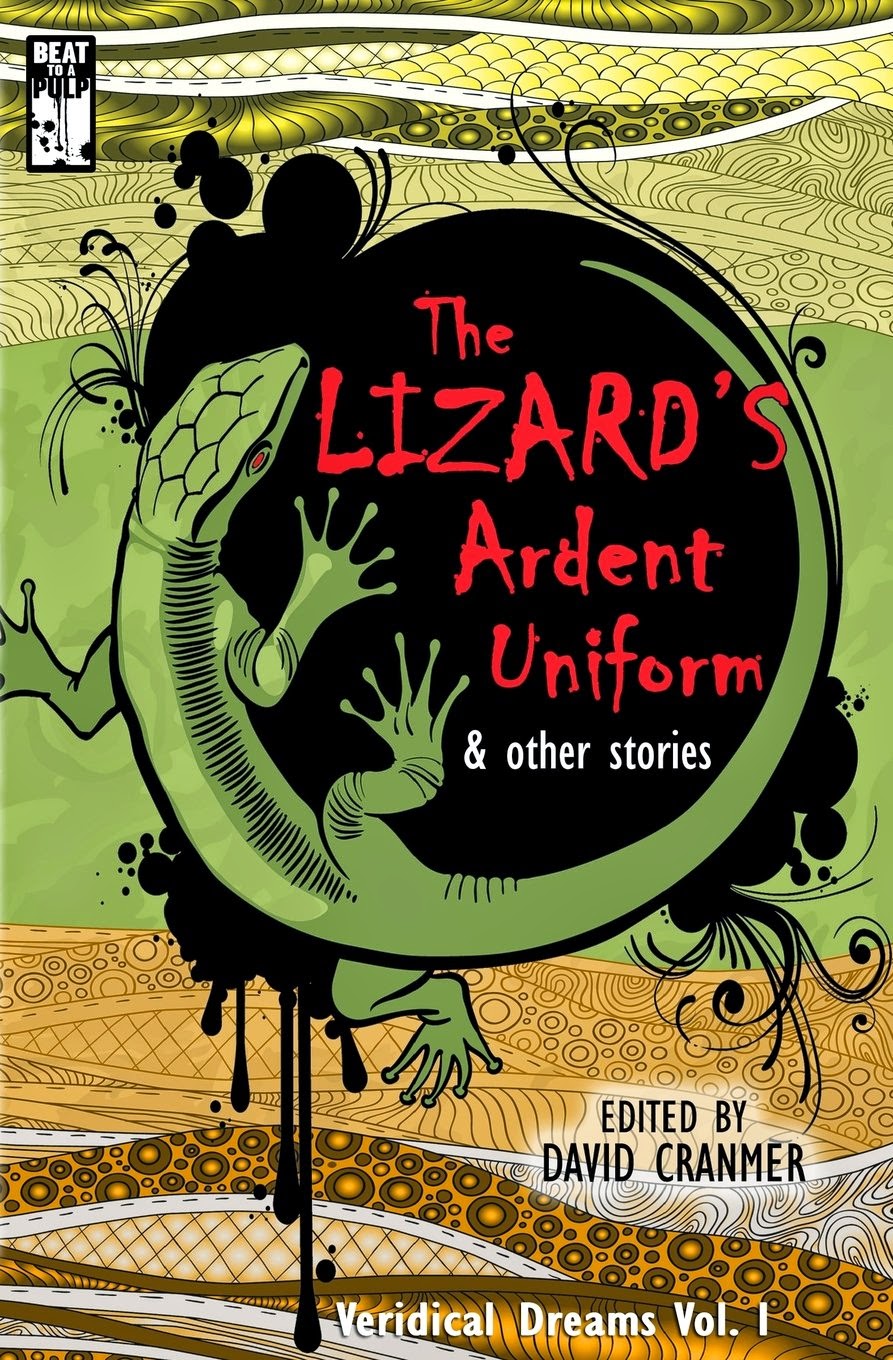 The book opens with “The Lizard's Ardent Uniform” by Chris F. Holm. Kyle Williams was forced to leave Boston and move to Santa Fe, New Mexico when his dad got a job at Ardent Industries. It wasn’t what he wanted to do, but at least he got a cool telescope out of the move. The third grader has been putting it to good use and seeing things in the skies above that he never would have been able to see in the old neighborhood on Beacon Hill in Boston. He's never seen a bright light beaming in from space to light up somebody or something out in the yard at 3:17 am before now either.

It may have been nearly 40 years since she has been back to Granny's farm in “Dust to Dust” by Terrie Farley Moran. The past was just too painful to revisit and it still seems like just yesterday.  The road might be paved now and the nearby barns and silos might have been replaced by malls and tract housing, but the legacy is still present. She just doesn't know how deep it runs.

Author Patti Abbott appears in quite a lot of anthologies and her work is always good. Such is the case here with “Twin Talk.” Wendy comes home from work to find her twin daughters doing that cat’s cradle thing with a skein of yarn again. What seemed weird and pointless at age 8 seems even more so at 13. Then there is their obsession with tying fancy knots. That isn't all that bothers mom about her daughters who renamed themselves some time back, Judith and Lilith.

Seeing things is just part of the problem in “The Malignant Reality” by Evan V. Corder. At first he thought the flashes were some sort of after effect from the old days when he used LSD now and then. Instead, it is something far more sinister in this strange tale set in upstate New York that has nothing at all to do with fiddles or Georgia.

Steve Weddle is up next with his “Ghosts in the Fog.” In the wake of an incident Mr. Danny Crawford discovers that his cousin Brent is in another wing of the hospitable undergoing surgery. Danny and Brent managed to get themselves in a mess and trying to explain what they did and why they did it isn't easy.

It begins with a hitchhiker that has bloody blistered feet in “The Debt” by Hilary Davidson. A car is pulling up and he has things to do.

A story titled “The Zygma Gambit” by Garnett Elliot brings the stories in the book to a close. Having the dream in his room, instead of the Precog bays means the dream is very powerful and will come true. Kyler Knightly has to get to work in April 2223 A. D. and protect human history.

Author bios and a poem by Kyle Knapp bring this well done book to a close.

Reviewing a collection or an anthology can be very tough if the book features complicated stories as one has to work to make sure one does not reveal a spoiler. Such is the case here as the seven tales presented are all good ones that push the boundaries in small and big ways. If you like considering the idea that there is far more going on than meets the eye this book is for you. A crime is present in many of the tales, but the tale itself might be fantasy, fiction or something else. The Lizard’s Ardent Uniform & Other Stories: Veridical Dreams Vol. 1. is one of those rare deals where each story is incredible good making the read simply fantastic from start to finish.

E-book version supplied by the editor in exchange for my objective review.

Thanks for taking the time to review, Kevin. Deeply appreciated.

Excellent book and glad to say so. thank you for this read and many others.