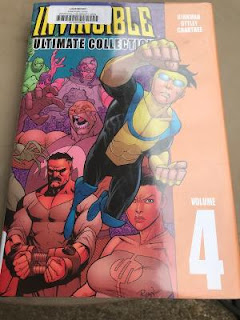 Invincible: The Ultimate Collection, Volume 4 the mission to Mars complete in Volume 2 has ramifications and consequences in this book. Additionally, humanity continues to prepare for the Viltrumite invasion while Mark's half-brother Oliver continues to grow at an accelerate rate. Mark also has girl problems, decisions to make in his regular life, and more villains to face. Building off of the previous volume, Mark has to decide what he wants and what is priorities are.

Action packed and interesting, the read suffers a little bit due to the fact that the focus is so much on Mark. The supporting cast continues to not get as much development as they should due to the Mark heavy focus. That means that some moments are not as intense or as strong as they should be. Also, a couple of Mark's insults do not age well now here in the real world. Asking an alien that can not speak English well “if he is retarded” or calling someone else “gay” for what he wears is not really appropriate. 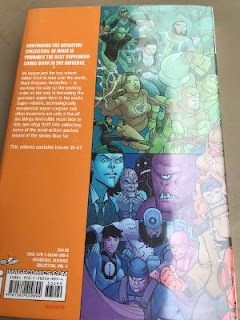 Once again, some future plot points are seeded in this volume in order to set up things in the future. One character in particular makes an incredibly stupid decision that is out of character for him. A decision so monumentally out of character and stupid so the reader knows that it will backfire.

Despite the flaws in the read, I still recommend Invincible: The Ultimate Collection, Volume 4 as well as the series. As always, these books need to be read in order as they build on each other.

My reviews of the first volume, the second, and the third in this very entertaining series. Looking forward to the future volumes in the series.

My reading copy came from the Lochwood Branch of the Dallas Public Library System.