Clearly, a book that was recently published does not really qualify for FFB. Yet, I have been doing this series as reviews for FFB since I started back in December of 2015. Therefore, I am doing it again this week with The Dark Angel: A Ruth Galloway Mystery by Elly Griffiths. Make sure you check out the full list of reading suggestions over at Patti Abbott’s blog. 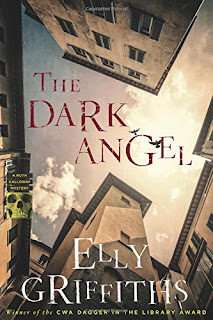 It is the middle of August as The Dark Angel: A Ruth Galloway Mystery begins and almost everyone in Dr. Ruth Galloway’s world is a bit out of sorts for various reasons. Watching Clough and Cassandra become Mr. and Mrs. Blackstock-Clough was part joyous and part sad as it reinforced her status with Nelson. There just isn’t a wedded future for them, as she knows, but that fact stings a bit more right now.  What she needs is a bit of a break before the term starts in September and that is when Professor Angelo Morelli calls from Italy.

The professor would like Dr. Ruth to come to Italy and examine some bones he has uncovered in the Liri Valley, not far from Rome. He offers her and her daughter, Kate, the use of an apartment in a remote hilltop village. It is Ruth’s chance to get away from Norfolk and the events of recent months. It will be her first foreign holiday in years as well as the first ever for her daughter Kate.

Before long she and Kate are on their way to Italy along with her friend, Shona, and her son, Louis. Shona could also use a break from boyfriend Phil (Ruth’s department chair) and the kids can play together and have a blast. Assuming the kids can get along and Louis does not resume his fondness for hitting the two years older Kate. Two weeks in Italy should be fun and it should not make much time out of the holiday to look at the bones. 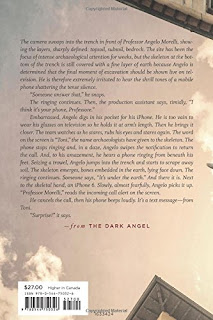 But, things go sideways almost from their arrival in Italy when graffiti on their doorstep warns them to go away. What that has to do with the strong World War II resistance movement in the local area decades ago, a modern day murder, and more is at work at the heart of The Dark Angel: A Ruth Galloway Mystery.

As usual in this series, the personal lives of numerous secondary characters supply various additional subplots that are rich in complexity, details, and nuance, and play their roles to further support and enhance the main plot of this novel which is the tenth of the series. Set in late summer 2015, archeology remains a theme in this novel and is sued to provide historical details that further embellish the discussions of the past as well as the societal backdrop of today.

Once again Elly Griffiths has spun a large web of characters, events, and complexity to enthrall the reader from the first page. A series that should be read in order and that is certainly the case here in The Dark Angel: A Ruth Galloway Mystery as this is a turning point book. For several characters, things will never be the same and there will be repercussions of that. A very good read, as is the entire series, The Dark Angel: A Ruth Galloway Mystery is strongly recommended.


The books, in order, and my reviews: